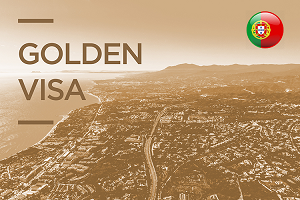 Portugal Golden Visa Program online. The Portugal Golden Visa is a golden visa program by the government of Portugal that grants residency in Portugal to people who invest in properties worth at least €500,000 or create 10 jobs in Portugal. The scheme began in 2012,and by May 2020 has been credited with investments of over 5.2 billion euros from over 20,000 persons (8,736 investors and 14,936 family members). As of August 2019, according to SEF, Chinese investment (see Chinese people in Portugal) in Portugal under the ‘golden visa’ scheme was down during the first eight months of 2019 a decrease of 15.7 percent from the same period of 2018. Investment by Brazilian nationals under the same scheme was up by almost 42 percent in 2019. Spain and Greece have programs comparable to Portugal’s Gold Visa program. Some of the advantages of obtaining a Portugal Golden Visa include (1) traveling visa-free in Europe’s Schengen Area, (2) eligibility to apply for Portuguese citizenship after five years of legal residency, (3) High quality education system, (4) healthcare system, as well as (5) low crime rate and high lifestyle options.

One of the most attractive options is the ability to apply for permanent residency and citizenship after 5 years without the need to reside in Portugal. In fact, the applicant and their family need only visit for two weeks every two years in order to renew the Portuguese Golden Visa. In Portugal citizenship can be granted without the applicant having resided in the country. However the investor having acquired residency through the golden visa program will need to demonstrate ties to the country and pass a basic language test. Citizenship of Portugal and a second passport conveys the right to live, work and study anywhere in the European Union. The Portuguese residency card granted through the golden visa program allows the holder to travel throughout the EU Schengen zone.

What is the Portugal Golden Visa Program?

The Portugal Golden Visa program, also known as the residence permit for investment activity (ARI), is a residency by investment scheme designed for non-EU citizens. Portugal launched the program in October 2012. The main objective was to attract international capital into the country, as it was much in need after the 2008 economic crisis. The program proved to be a great success, raising 5.5 billion Euros in a little over eight years.

Portugal offers a dreamy landscape, a wide coastline, a climate full of sunshine, hospitable people, and a delicious cuisine. Better yet, it provides this high quality of life at a very affordable cost of living. These features make Portugal a very attractive destination for international investors to invest in and obtain the right to live, work, and study in the country. Furthermore, the Portugal Golden Visa program provides the opportunity to become a permanent resident or a citizen in Portugal in only five years.

Golden Visa applicants have the right to live and work in Portugal, but there is no requirement to do so. The country offers a favorable tax regime to those who decide to relocate to Portugal. The applicants enjoy free travel within the European Schengen visa zone. After holding a Golden Visa for five years, the applicants can apply for citizenship or permanent residency in Portugal, leading to a passport. The Portuguese passport allows the owner to live, work, study anywhere within the European Union.

you do not longer have to complete all those process and requirement; just buy your golden visa online from All in one document by contacting us here